We found a great deal on a Home Comfort wood cook stove and just had to have it.
Like so many things I tend to be impulsive and we bought this monster with nowhere to house it.
So at zero hour I’m scrambling to find a solution.  I could build a structure or by a ready built one.  We opted for the ready built one manly because it was large enough to be a dual function building.  We’re going to put the Kitchen on one side and crafting shop on the other.
The Building is a 12’X24’ Side Lofted Barn. 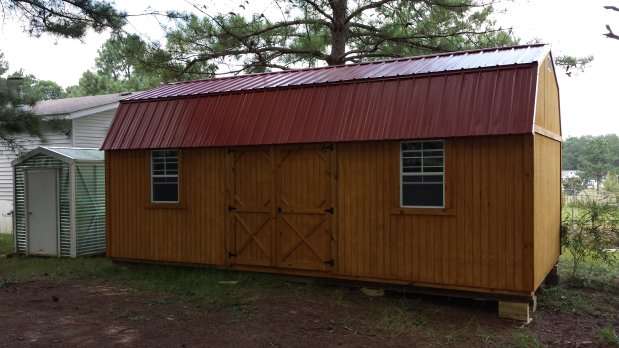 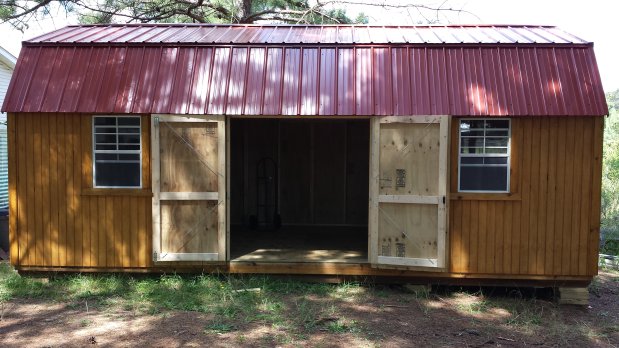 Since the shed is wooden I wanted to protect it from the heat and occasional amber.  I had some 12X12 tiles laying around and figured this will work good for the floor.  I’m going to insulate the walls and install cement board behind the stove. 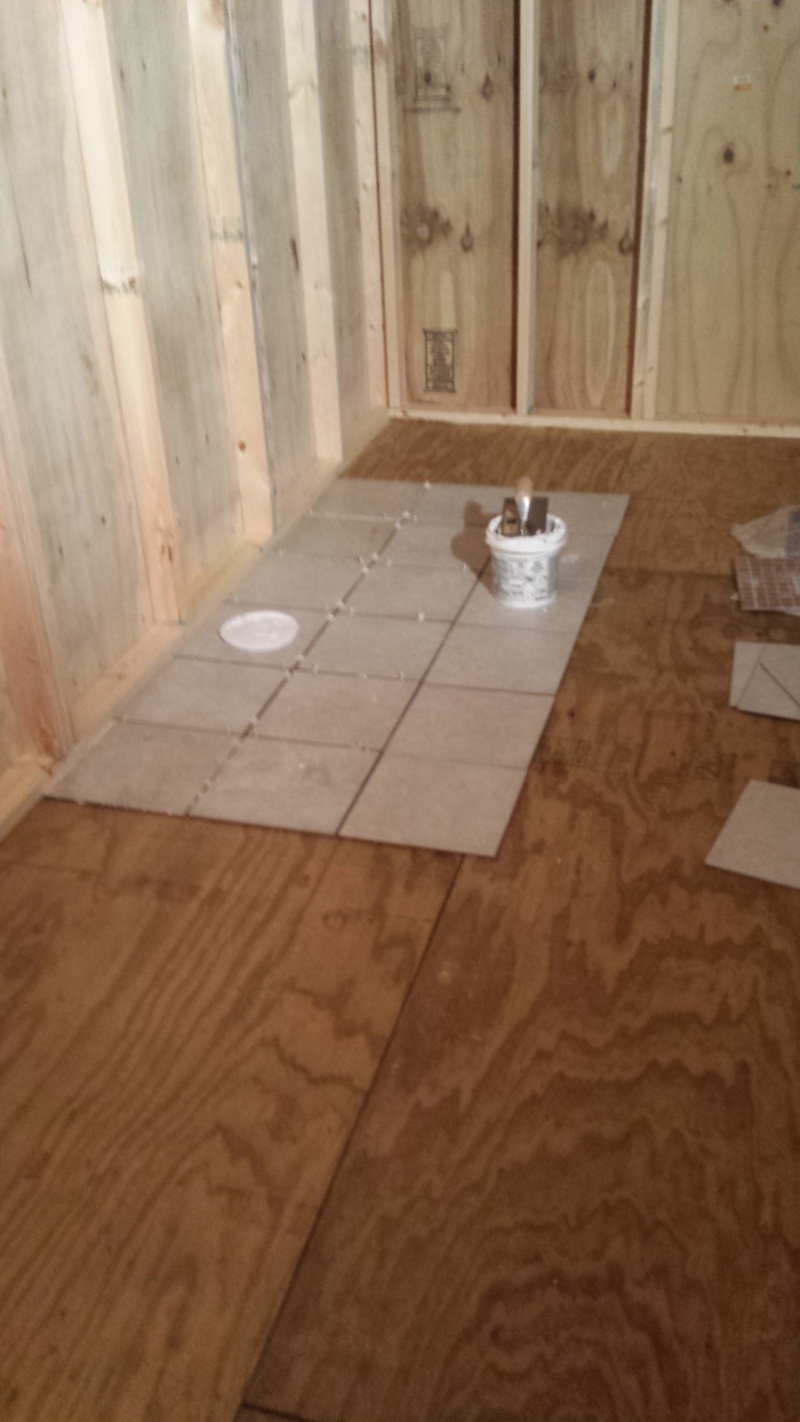 Laying the tile the night before stove pickup 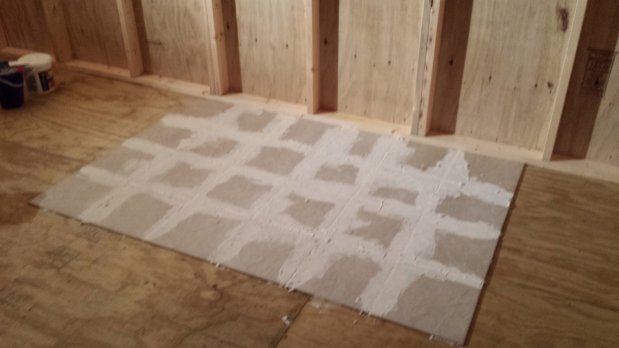 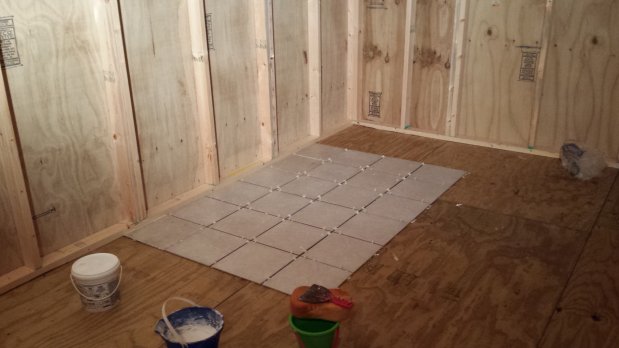 Like I said the stove is a Home Comfort I believe it was built in the late 20’s early 30’s.  It’s not totally cast iron but a mixture of galvanized metal and cast iron with a white enamel outer shell.
It’s going to need a lot of cleaning before we can use it, as you can see by the rust on top.

One thing I was told a few years ago by a gentleman that restores these types of stoves is to make sure the fire box ix in good shape.  He said people end up building a large fire and keep it burning to try and heat the house….(cook stoves are for cooking not for heating)  don’t get me wrong they’ll put out some heat and about run you out of the kitchen.
When the fire box is abused if becomes malformed, even melted and the grates don’t operate properly.  Well this stoves fire box looks like it in near perfect condition. 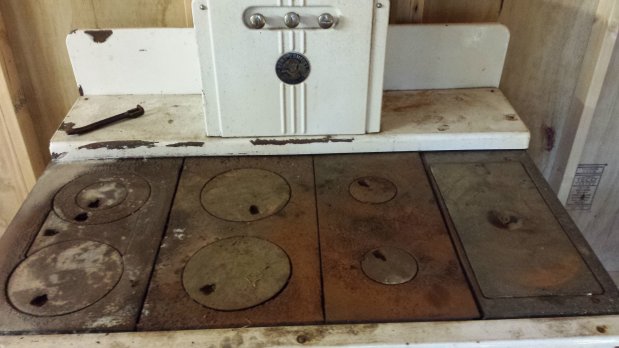 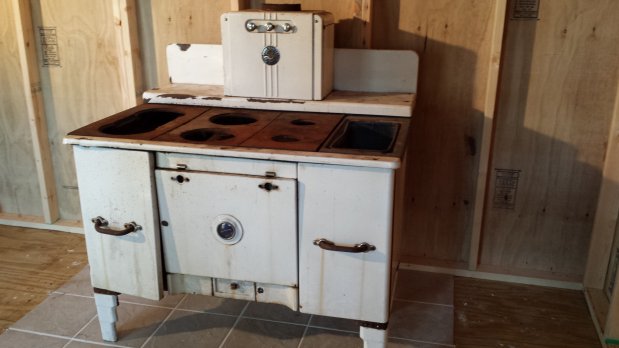 As you can see by the picture, the oven handle is off.   When we bought it the guy told me he hadn’t had time to work on the door and knocked some $$ off for me to fix it.  When I got it home I started to think I had made a mistake.  The door wouldn’t budge!  I tried pulling and even used a pry bar but it just felt like the door was bending out and not opening.  I looked inside with my flashlight and couldn’t see anything that would be restricting the door.  The are two small I guess they are like hinges, one on each side so I kept spraying PB blaster in it every day and worked it with the pry bar.  Buy day 4 the door finally came free and now works like a charm.  I still need to figure out how I’m going to mount the handle back on it though.

Looks good so far, I like the style of the building especially the centered doors.

This is so exciting! I am happy for you all. Love the building and the stove. I'm glad you posted some pictures of it all.

This is my dream, a "summer kitchen" as they called it here.. complete with a wood burning cookstove! Maybe some day....

Joe picked up our icebox today. I'm sure he'll get some pictures of it sometime next week. I can't wait till the stove is cleaned up enough to try it out. We have a lot of work to do to make the kitchen what we want, but a little at a time.
_________________
Sonshine
He who cultivates his land will have plenty of food,
but from idle pursuits a man has his fill of poverty
Proverbs 28:19[b]

We had a working wood cook stove like this one in the basement when I was a kid. Whenever I see one for sale I'm tempted even though MissKitty and I already have an Atlanta one.

I'd love to see pictures of yours and MissKitty's stove. We haven't used ours yet because we still have some work to do on it. Our icebox seems to be working ok. We put 6 2 litre soda bottles filled with ice in it and it got the temp down to 38 degrees. I'm trying to get Joe to post some pics of it, but things have been hectic around here.
_________________
Sonshine
He who cultivates his land will have plenty of food,
but from idle pursuits a man has his fill of poverty
Proverbs 28:19[b]

Thank you for letting us tag along on your project. I am enjoying it so far, and look forward to updates along the way.