I had lost a few chicks for various reasons, and gave some away, but this time they wer victoms!

I have 2 dogs. One is a begal, and he is a very good and smart dog. I let him roam free, and he doesn't even try to bother any of the other critters. Even though he is trained to hunt rabbits, he leaves the caged ones alone.

The other is the complete oppisite. He is a Red Bone Hound. He is VERY hyper. I keep him tied one a run line. He tries to "play" with everything, and is so stupid he can't be trained. He also jumps up on everyone. He knocked my oldest daughter down and scratched her up one time (trying to play). Well the other day he got loose from his line, and ran my 2 free range chickens up a tree, then he found the chicks, and proceeded to try and pull hem out to "play" through the wire floor of their cage. He killed 10 in one night!!!!

I have been tring to find a home for him for a while now, but now the first day that I get off of work he is going to the humane socioty. I really wanted to find him a home, so I have kept him much much longer than I wanted to. Now he has costed me a lot of eggs and meat, so he has to go!

I do not understand how this dog turned out the way it did. I friend gave him to me as a pup. Both his parents a smart, calm, and well trained hunting dogs. He is nothing of the sort. I have tried every training method I know of, but he just won't learn.

Have any of you ever had a dog like this? Or am I just cursed with bad dogs. My wife says he won't learn because he knows I don't like him, but I liked him until I found out he wouldn't learn.

Sorry about the rant, but that dog really gets under my skin. The thing is though, the more I think about it, themore it bothers me that I dislike the dog so much. When it does something bad I can't help but think about how much I have done for it, and this is the thanks I get. Then once I calm down it makes me thank God the he (God) is not like me. The Lord has done far more for me than I could ever thank him for, but when his still small voice tells me to do something I still hesitate. I gave the dog, food, shelter, and a home, and I get mad when it does something wrong; Jesus saved my soul from Hell, yet he still loves me when I mess up. What a wonderfull God we have!!! None the less, the dog has to go, LOL!!

Some dogs are like that. And, I wouldn't like him either and would want to get rid him.

I had a beagle once that was a good rabbit and pheasant dog, but he would not let my banty chickens alone. I had two bantys that were free range and he ended up getting loose and killed them both. I kept him because he was such a good hunting dog. I just made sure he couldn't get loose again.
On the other hand my German Shepherds have loved my livestock and are the smartest dogs I have ever raised. The one we now have won't even walk in my garden once it is planted.

I liked your comparison of your feelings for your dog and God's feelings for us. I makes one stop and think how good God is to us.

Chad, if you lived closer, I'd sell you some of my chicks, cheap. We have way too many and nobody to buy the extras.

Chad as I was reading your post I thought, isn't it just like God to take a stupid dog to remind us that he is a good and merciful God and we are saved because of his love and mercy for us.
Your post opened my eyes to some things I've been thinking about recently. Thank you for posting.
I am sorry you lost meat and eggs!

Thank you all for the kind words. I never expected that many of my eggs to hatch in the first place, so I am still happy with the number of chicks I have left. The Lord has blessed me greatly, and I can never thank him enough!

Somewhere along the line I must have lost count. Yesterday I moved my chickens into a larger pin. (It is just temporary until I finish the larger one I am building) Anyway, I had a chance to take a few pics, and found out I have 31 chickens, not 35 as I thought. It is much easier to count them in a pic, btw. I thought you guy might like to see the pics, so here you go. Bare in mind, the temp coop is just the unfinished hen house of the final coop, and also keep in mind I am not very good at building. LOL! 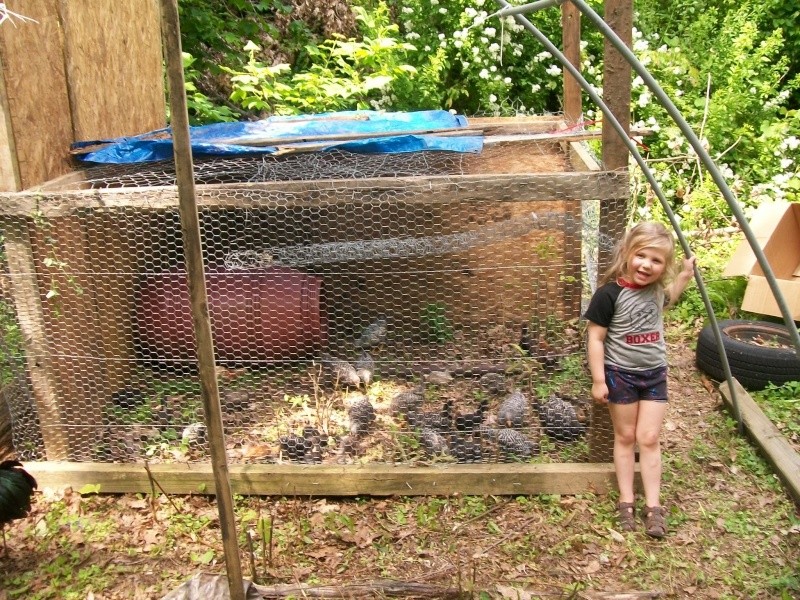 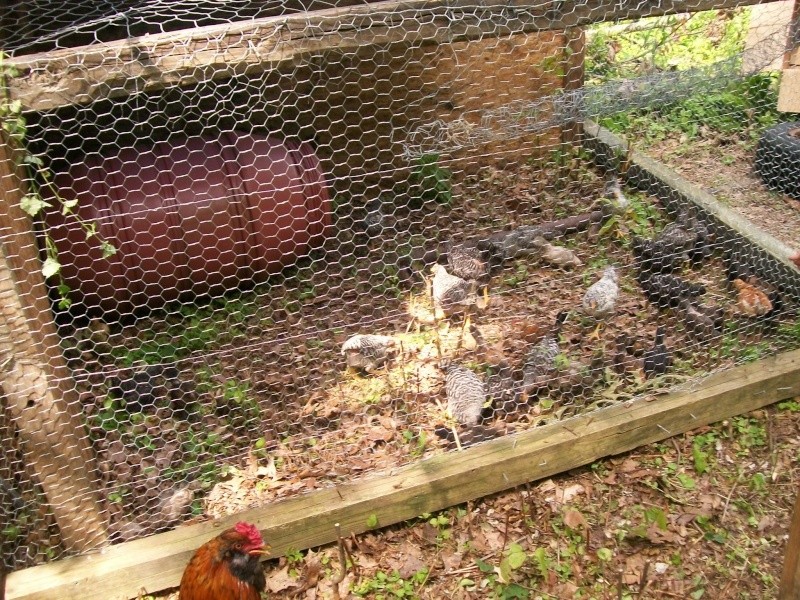 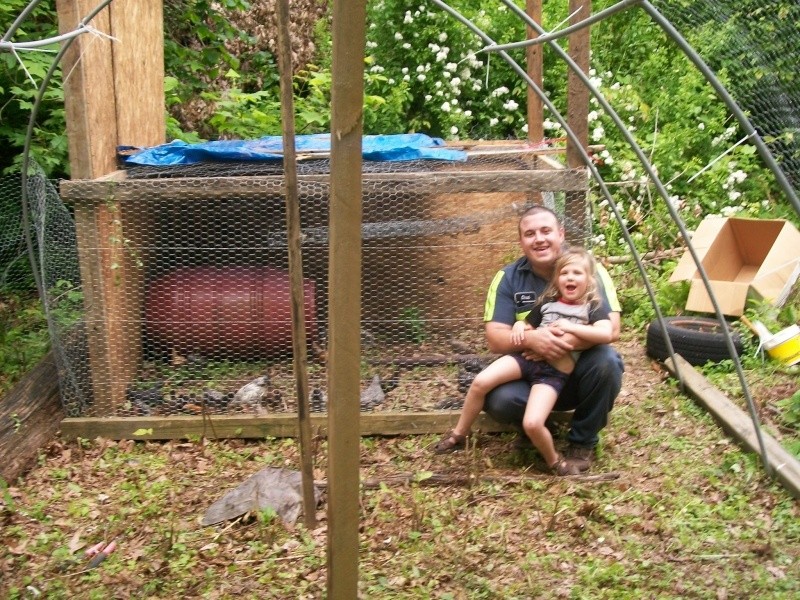 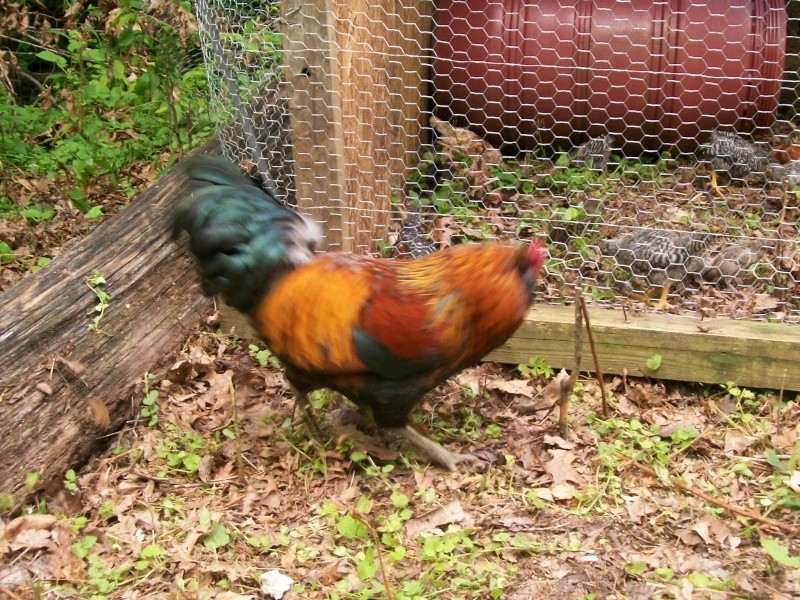 The last one is one of my 3 year old Easter Egg Roos trying to get in to the other chickens. He will be put in, but not until the others get bigger.

Enjoyed those pics. Keep them coming. All looks good.

Of course, the cutest little chick is the one wearing the gray t-shirt.

dizzy wrote:Of course, the cutest little chick is the one wearing the gray t-shirt.

I agree with that.

Kids (children) are really great fun and they love the country too.

Love the pictures! Your granddaughter is so cute.

carla wrote:Love the pictures! Your granddaughter is so cute.

Thank you all for the kind words.

Carla, she is my daughter, not Granddaughter. I am 29 years old. No grand kids for me for a while. She is my oldest. LOL!

Thanks for sharing your picture, I enjoy seeing others homesteads and livestock, as well as their families.

Harvey I am so sorry I didn't recognize you with out the hat. You look younger without it, lol.

Funny you said that because I am a really big Superman fan! LOL!